Triangulation-like approach to wireless charging of sensors and smartphones

Thanks to a new approach using multiple antennas, wireless charging of IoT devices – and even smartphones – from larger distances and out of sight is transforming from dream into reality. Huib Visser, senior researcher RF harvesting and wireless power transfer at imec Netherlands, gives a sneak peak into the current status and future developments.

As inductive chargers have been on the market for quite some time, “wireless charging of smartphones is already possible,” you might say. Not entirely untrue of course, yet ‘connectorless charging’ might be a more appropriate term to describe today’s technology, as inductive charging still requires close contact between the charging station and the device that needs to be charged. This not only limits its usage for smartphones, but also makes today’s approach incompatible with the requirements for charging of IoT devices that will increasingly populate our surroundings. Thanks to developments in 5G, industry 4.0, smart cities, smart buildings, smart traffic etc. we will see an increase in battery-powered devices. It will be impossible to charge them though wired connections or short-range inductive methods. Rather, they will need to harvest their energy from their surroundings. Especially in indoor applications, where other methodologies as photovoltaics or thermal energy conversion quickly meet their limitations, wireless charging is an excellent candidate to further develop.

True wireless charging would at some point mean: sufficient power transfer from a longer distance, without the need for a direct line of sight ánd targeting mobile as well as fixed devices.

So far, no technology has entered the market that complies with either one of those specifications. Yet, thanks to recent breakthroughs at imec, one could start dreaming of a not so distant future in which all of this might become reality.

Limited by the laws of physics and of governments

As mentioned by Menno Treffers, Chairman of the Wireless Power Consortium, in his blog post “Dreaming of power through the air”, the safety limits for human exposure to radio-frequency electromagnetic fields are likely one of the most important factors why large-distance wireless charging has not yet found its way to the market. The laws of physics state that in spherically expanding electromagnetic waves, power density decreases quadratically over distance. For ultra-low power devices, this could still result in enough power remaining at several meters from the charging station. Hence, for this specific context, commercial solutions can already be found. Yet, the distance over which sufficient power can be transferred is prone for improvement.

Already in 2018, imec has built a demonstrator reaching a continuous power budget of 25 microwatt (for 1,5 or 3V) at five meters distance from a 3 watt eirp transmitter (eirp being the product of the transmit power and antenna gain). This is a two- to threefold improvement compared to commercial devices in terms of distance over which such power budgets can be obtained.

By storing this energy in a condenser, it is possible to – every two minutes – deliver some tens of milliwats for several microseconds. This is sufficient to wake up a radio (e.g. Nordic low power), activate a sensor to measure some data and wirelessly transmit this data to a receiver. A scenario that imec has demonstrated in the 915MHz and 2,45GHz frequency bands, which are two license free bands for industry, science and medicine (ism) in the U.S. and worldwide respectively.

In order to obtain these results, imec has built two dedicated rectenna (i.e. rectifying antenna) prototypes that ensure the power conversion at the receiver. For these prototypes, imec used a somewhat unconventional approach for the system optimization. Rather than optimizing each block individually (e.g. rectifier, converter, power management circuit…), imec opted for a suboptimal rectifying antenna: delivering a relatively high dc voltage, but creating an opening in the available power envelope to further optimize the power management circuit. This has resulted in a better overall system performance than with each building block being optimized separately.

Two rectenna prototypes for power conversion in wireless-charging setups. One for the 915MHz U.S.-ism band (left) and one for the global 2,45GHz ism band (right). Both rectennas have a miniaturized antenna integrated on the PCB. The 2,45GHz rectenna is shielded with a ground plane allowing integration on metal casings.

While sufficient for IoT sensors, the realized power outputs are far from enough to power devices such as smartphones. And there is little or nothing more to be gained at the receiver side. To obtain the power densities needed to charge higher-power devices, one would have to crank up the emitter to legally unacceptable levels.

Yet, imec has found a way to overcome these apparent roadblocks.

By combining the emitter strength of multiple antennas in a triangulation-like mechanism, one can create a relatively small spherical bubble of high enough power density without exceeding any radiation limits and without ‘contaminating’ the spectrum outside the bubble. 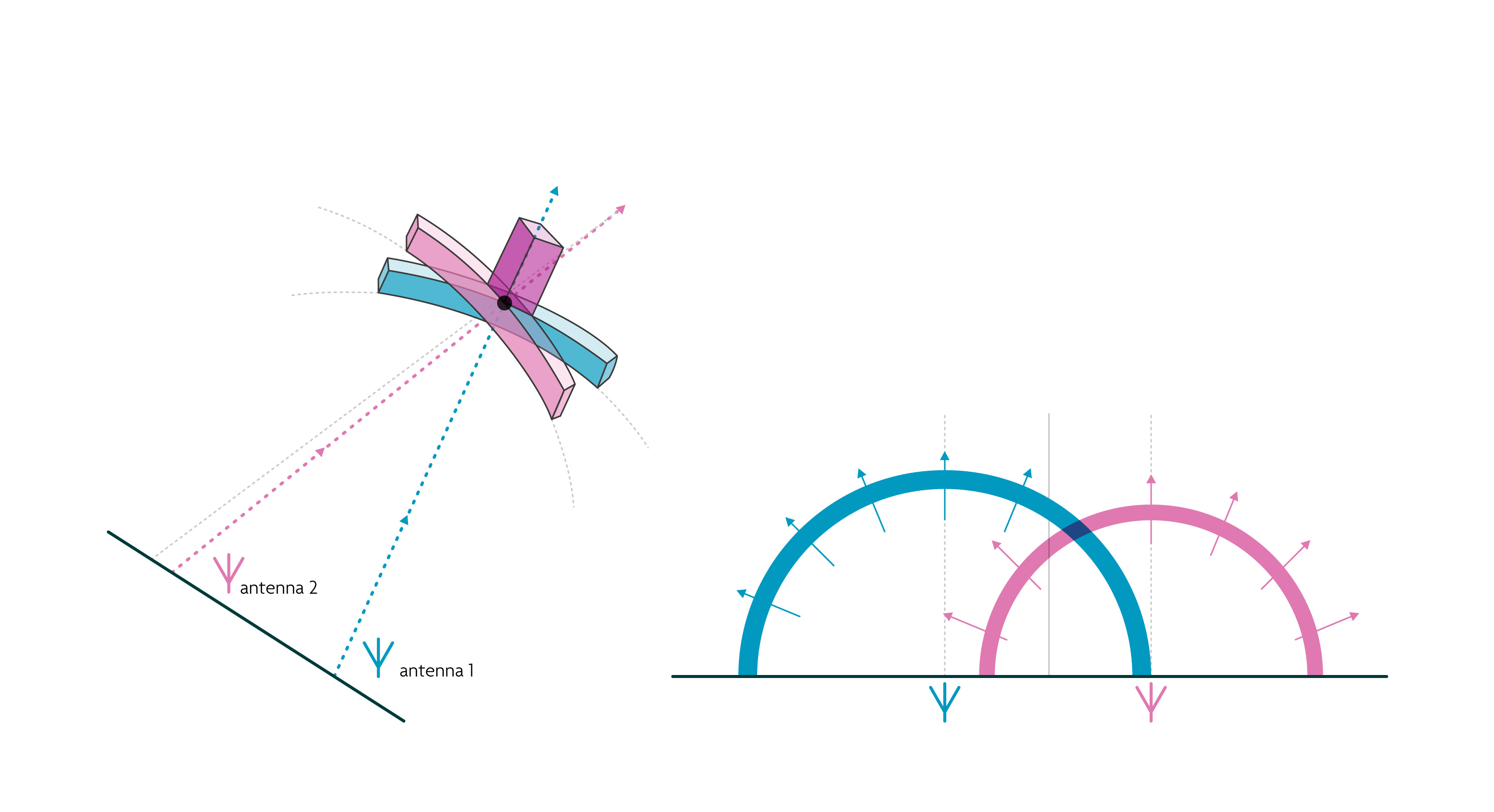 By using a triangulation-like concept with multiple antennas (top), a focused higher-power bubble can be created (bottom-right) without exceeding any legal radiation limits. Bottom-left: a classical spherical broadcasting-antenna pattern. Bottom-center: a directional antenna, being investigated in 5G scenario’s, but still limited in its applicability in the ism bands.

In this setup, all antennas can emit at the maximal power legally allowed, yet in different time intervals. The generated spherical electromagnetic waves will propagate independently from each other (and suffer from the described quadratic power decay). Through clever design of the time intervals, one can create a focal point in which these waves come together in phase. In this focal area, the power densities will add up to each other, creating a bubble of higher power density that can be positioned where a battery-powered device needs to be charged.

For an array of N antennas, the gain in average power becomes N and in peak power N2. So with two antennas, you get an twofold increase in average power and a four times higher peak power. This is a more advanced approach than the smart-antenna scenario’s being investigated in 5G contexts. These use directional beams, but still suffer from the legal power restrictions in the ism band.

From line of sight to out of sight, from fixed to mobile

Using this approach, imec has conducted a first series of successful experiments. Even in a non-optimized setting, with non-ideal pulses and a lot of scattering, these tests confirm the theoretical power gains and the fact that – by tuning the time intervals – power bubbles can be created at a location of choice. While promising, the setup was still chosen because of its apparent simplicity: with the antennas being relatively far apart and the position of the object being stationary and known upfront.

Now, imec is taking the whole idea to the next level; with patents pending. Ongoing research involves antennas being positioned much closer together (so they can be part of the same base station) and the object not having to be in direct line of sight. By clever interpretation of the scattering and reflections of the emitter signals arriving back at the base station, one can find a way to charge devices even if they are around a corner or if an object is the direct path between emitter and receiver. Once demonstrated, this feature becomes an important asset to enable real-life applications whereby one station charges multiple (IoT) devices in the same room without being hampered by other objects in the vicinity.

To even take it one step further, imec is developing a methodology to include passive location detection of the device that needs to be charged. Which means that, even if the battery of the receiving device is empty, the signals coming from the base station can still retrieve the device’s location and start charging it. Once demonstrated, this type of solution could especially become important in the scenario of charging smartphones, since no one really wants to put his smartphone in the same place each time it needs to be charged. For IoT devices, this feature might at first glance be less important, since most IoT sensors will be mounted in a fixed place (e.g. wall-mounted air quality sensors), or will have the possibility to return to a known position (e.g. sensors on an industrial robot that returns to his standby position after each operation). Yet, also for IoT sensors, the potential advantages of location detection should not be underestimated. Power restrictions are amongst the most restrictive specifications in IoT-system design. Not exceptionally, battery-powered sensors need to have an autonomy of several years one a single battery charge. For example in asset-tracking or industrial process monitoring. Which means the amount of data that can be transmitted has to be kept to a minimum, not even mentioning the severe restrictions on computational intelligence that can be embedded in such sensors.

So what if passive location detection enables charging stations to detect and charge IoT sensors even when they are not in a fixed location? This could dramatically increase the available power budget and therefore level of intelligence that can be embedded in them.

Imec is currently working on the experimental setup to make all of this happen and is actively looking for industrial partners who want to have a stake in developing these concepts and technologies in to solutions that can be transferred to industrial solution providers.